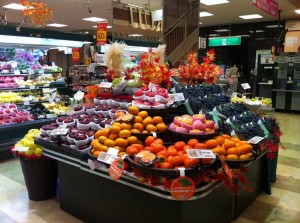 Seasonality is of utmost importance to Japanese consumers.  Fresh, in-season fruit is showcased in stores, appealing to customers who value “shun”, or the “peak season”.  In summer, fruit such as apricots, peaches, grapes, cherries and watermelon abound, whereas winter is citrus season in Japan – bringing with it mikan, iyokan, dekopon, and other varieties of mandarins or mandarin-like citrus fruits.  Unlike domestic fruits, imported fruits’ seasonality is often not highlighted by retailers, and consumers are thus largely unaware and unconcerned of the seasons of imported fruits.  However, due to the sheer variety of domestic offerings on the Japanese fruit market, imported fruits in general may find the staunchest competition in June through August, and imported citrus from December through March.

Secondly, easy preparation proved an important draw in attracting Japanese consumers, especially with – though not limited to – younger generations.  Fruits that can be washed and consumed immediately, or easily peeled without a knife, are immensely popular.  Japanese consumers of all age groups purchase apples, mikan (mandarin oranges) and bananas most heavily, with strawberries, other domestic citrus fruits and grapes following behind; none of which require cutting before consumption.  Survey respondents indicated that one key reason they did not purchase fruits was that fruit is time-consuming to prepare.  Fruits requiring cutting of some kind before eating – oranges, grapefruits, persimmons, kiwis, and peaches – were the least popular with Japanese consumers in terms of annual household expenditure devoted to each fruit.

Finally, it is important to note that Japanese consumers’ fruit consumption habits vary enormously by age.  The youngest and oldest generations are by far the heaviest consumers of fruit, with those aged 6 years old and below eating an average of 104 grams of fruit per day, and those aged 60 and above around 142 grams per day.  By contrast, those in their 20s consume a mere 61 grams of fruit per day (the equivalent of around half a grapefruit).   A shocking 7.2% of poll respondents in their 20s claimed to never consume fruits at all, earning the younger generations the label of being fruit-banare, or fruit-shunning.  However, while Japanese consumers in their 30s do not consume significantly more fruit than those in their 20s, they tend to purchase more for their households.  Fruit is strongly associated with health and nutrition in Japan, and it appears that the vast majority of Japanese fruit buyers are either purchasing it for their own health or that of their children.

Those interested in entering the Japanese fruit market must understand how seasonality, ease of preparation (or lack thereof), and consumers’ age factor into purchasing decisions.

Promar Consulting has investigated a variety of aspects of the fresh fruit market in Japan and other regions. If you are interested in knowing more please contact us.