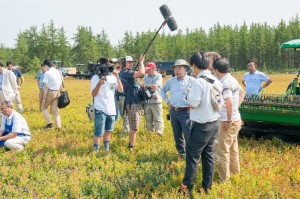 Once again in April Promar welcomed representatives of the Wild Blueberry Association of North America (WBANA) from Canada and supported their annual attendance at Tokyo’s FABEX food and beverage trade show.

This was the final event in a highly successful promotion year for Promar and WBANA, which included highlights such as a trade mission to Canada to connect with the Canadian blueberry industry and a seminar at the Canadian Embassy on research related to the health benefits of wild blueberries.

Wild blueberries are completely distinct from cultivated blueberries. Wild blueberries grow naturally in open fields with little human intervention but are processed using highly advanced quick freezing technology that allows individually quick-frozen (IQF) wild blueberries to be shipped worldwide. Japan is the second largest market for Canadian wild blueberry exports behind Germany and in Japan, the jam industry is the largest purchaser of the berries. This year, the Japan Jam Association and its members celebrated their 50th anniversary. The jam industry and the Canadian wild blueberry growers decided to use this milestone as an ideal chance to exchange opinions about each side’s needs and experience. Promar organized a successful industry trip to Canada for the Jam Association members in mid-August 2015, during the wild blueberry harvest

Unlike cultivated blueberries which are grown and harvested in a more controlled environment, wild blueberries can only be harvested during a 3-4 week period each year, and each field can only be harvested every other year.  Human effort cannot deliberately increase the number of wild blueberries plants which multiply and expand across fields naturally– which is why the species is considered “wild.” The growing area is also limited to a few eastern Canadian provinces and in the State of Maine in United States

As Promar moves into the 2016/17 promotion planning season, our challenge is to find a way for everyday Japanese consumers to understand the beauty and expansiveness of Canada’s wild blueberry fields that so impressed the Japanese jam industry.  Stay tuned for updates this year!

Photo: Members of the Japan Jam Association were interviewed by local Canadian television on their impressions of the harvest.