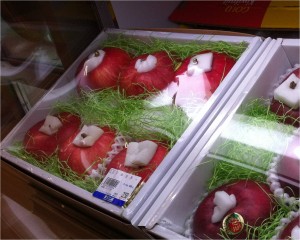 Taiwan has traditionally been a big importer of Japan’s Aomori apples. The size, color, taste and shape of the apple make it an ideal product for gift giving, a popular tradition that peaks during the Chinese Lunar New Year. However, recently, Japanese apple exporters have been facing challenges in promoting their product and maintaining their share of the Taiwanese market. As Japan’s Ministry of Agriculture, Forestry and Fisheries looks to improve the promotion for fruit exports, senior consultant Chisa Ogura and research analyst Paul Tsai explored the challenges Aomori apple is currently facing in Taiwan.

Since Taiwan joined the WTO in 2000, more importers have entered the apple business. In-step with the growth in the number of importers, Taiwan has increased its annual imports of Aomori apples from 2,000 tons in the late 90s to 20,000-25,000 tons in recent years. The Aomori apple season goes from October to May. This season, the Japanese apple is facing several significant challenges: higher prices due to the appreciated yen, curtailed supply stemming from lower production, and stronger competition from other countries; these are the main reasons why traders have forecasted a 60% decrease in imports to 12,000 tons this year.

In addition to these difficulties, apple exports are suffering because of the lack of innovative and exciting promotion programs in Taiwan. Annual visits by local growers, government officials and sporadic in-store “sales festivals” have been the long-term norm. However, if Japan wishes to maintain the prominence of the Aomori apple in the Taiwanese market, promotion activities need to be revamped.

Aomori apple will continue to be a popular gift-giving product. Nevertheless, the future of it as a popular table fruit in Taiwan is a challenge which requires collaborative rethinking by Japanese producers, regional governments, and also the central government.