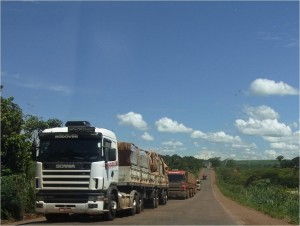 Interviews with soybean-related institutions, cooperatives, farmers, and Aprosoja, a soybean producer association, revealed some challenges that are hampering the development of Mato Grosso’s soybean industry. One of them is the damage caused by Phakopsora pachyrhizi, an Asian-type soybean rust which has been spreading in Latin American since around 2000 or 2001. The outbreak of soybean rust has limited increases in soybean productivity.

An even more severe issue is the high distribution cost. Mato Grosso is located in the inland region, and travelling in and out of the region incurs high costs for traders. Furthermore, railroad and water channel infrastructure is poor in Brazil, so traders have no choice but to use trucks as their means of distribution. Distributing by truck can lead to a great increase in costs. During the long trip to the coastal ports, each truck loses around 60 kg of grains due to the poor road quality and the aging vehicles (15 years old on average).

The photo above was taken on the main road in Mato Grosso in early February, 2011. Although the harvest season had just began, the road was already packed with trucks.

However, traders are expecting that changes in the distribution channels. Until recently, Mato Grosso’s grain distribution was dominated by international grain companies such as Cargill, ADM, Bunge, and also domestic Amaggi. However, recently, producers are strengthening their negotiating power by establishing new cooperatives and China, the largest importer of soybean from Brazil, is not only purchasing and investing in agricultural land in Brazil, but is also working with local producers on establishing direct importing channels, which could secure stable supply to China.