China’s demand for beef is booming, driven by higher incomes and urban lifestyles that include more eating out and increased spending on protein; but with domestic production stagnant, China’s growing beef demand is primarily being met by increasing imports.

As the chart below shows, imported beef may only be a bit over 10% of the China market, but it is responsible for almost 100% of the growth. 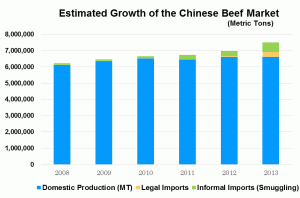 Recognizing that domestic production cannot meet demand, China has recently approved or is in the process of approving new suppliers including Costa Rica and Mexico and reapproving Brazil, who had been banned in 2012 due to BSE risk. This will bring the total number of approved suppliers to the China market to 8.  It is rumored that the US too may soon finally be allowed back into the China market legally, after being banned in 2003, also for BSE.

While legal suppliers are growing, the tight beef supply in China has also encouraged a huge increase in informal beef imports, with some estimates putting smuggled beef at over 65% of the foreign beef market.  Informal imports, often brought through Vietnam and Hong Kong, have long been a factor in the beef market and end up on menus at all price levels of restaurant. But 2012 showed a particularly strong surge in the informal sector, with Indian, Brazil and US smuggled beef showing strong presence.

Informal imports are expected to decline however, as Brazil has become legal. If US beef also is approved, smuggled volumes will further drop, leaving India and a handful of other small suppliers as the major origins of smuggled beef in China.

Overall beef imports in China are predicted to grow another 20% in the next 5 years offering strong opportunity for a beef supplying countries.

Promar has done numerous projects on the China market as well as trends in beef markets.  If you are interested in learning more, please contact us.