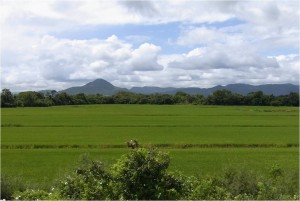 Senior Consultant Chisa Ogura recently visited the largest rice growing area in Brazil – Rio Grande do Sul – to research rice production and distribution in Brazil. Rice is a staple food in Brazil, along with wheat and cassava. Average annual rice consumption per person is around 33 kg. Brazil’s rice production was more than 12.8 million metric tons in 2010, which exceeded Japan’s rice production. Most of this rice is consumed domestically in Brazil.

One of the big challenges facing the Rio Grande do Sul rice industry is a weed called red rice. Because the red rice is genetically so similar to the white rice plant, eliminating it as a weed is quite difficult as any herbicide for red rice plant will also kill the white rice plant. However, BASF has developed a new technology called the Clearfield Production System which is becoming widely used a way to protect crops from weeds. Under this system the farmer plants an herbicide-tolerant variety of rice and then sprays a corresponding special herbicide that will kill the weeds and leave only the herbicide-tolerant rice. Because of this new technology, the average rice yield in Rio Grande do Sul has increased to 7 metric tons per hectare in 2010 from 5 metric tons in 2003.