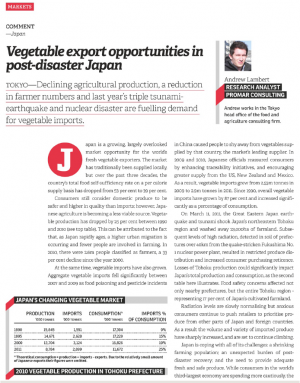 A report by Promar research analyst Andrew Lambert on Japan’s growing demand for imported vegetables was published in the February 2012 issue of Asia Fruit Magazine. The article looks at how the long-term population trends, coupled with the lingering impact of last year’s earthquake and tsunami are increasing demand for vegetable imports.

Traditionally, the Japanese market had relied primarily on its domestic vegetable supply. However, the country’s food self-sufficiency rate has been falling, and as a result, vegetable imports have been increasing as a percentage of total consumption, from 9% in 1990 to 25% in 2011.

While this increase in Japanese vegetable imports had been long predicted, the Tohoku earthquake in March 2011 was a tragic surprise.  The resulting tsunami washed-away thousands of hectares of farmland, and radiation from the quake-stricken Fukushima nuclear plant was detected in crops and soil in surrounding prefectures. Restrictions placed on produce distribution after the disaster and increased consumer reticence towards food products from the Tohoku region are still impacting Japan’s vegetable market a year later.