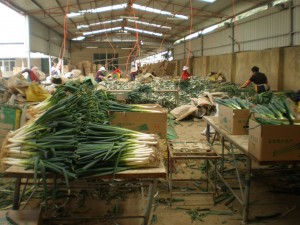 China has always been the largest vegetable supplier to Japan. However, there have recently been concerns in Japan that the increasing production costs – wages, land, agrichemicals, etc – could lead to a higher supply cost. Promar research analysts Paul Tsai and Leo Li explored current and future trends in production and marketing of the most popular vegetables that are coming to Japan from China.

Japan’s self-sufficiency rate for vegetables (volume base) has been around 80% for the past decade. Although this is considered to be a high rate, Japan still imports 2 to 3 million tons of vegetables each year. China accounts for 53% of Japan’s total imports last year, which are sold to retail or for further processing. Through our interviews with industry players across five Chinese provinces, Promar learned that while wages, fertilizers, and equipment expenses have increased over the years, the yearly percent increase has been quite consistent. The market price of the vegetables themselves, however, fluctuates dramatically each year.

Changes in Chinese domestic consumer eating habits have also impacted vegetable exports to Japan. A popular China-produced vegetable in Japan, “negi” or leek, is being challenged by demand from China’s own domestic market. According to Promar surveys in several Chinese regions, the Chinese market price of leeks jumped several-fold after the lunar Chinese New Year in 2012. TV programs have promoted the health benefits of leeks, which are a rarely consumed vegetable in China, and this promotion has driven rising demand for leeks. For the first time, this year some Chinese traders are finding it more profitable to sell vegetables to the Chinese domestic market as opposed to exporting to Japan.

It is expected that export prices of Chinese vegetables will likely increase in the coming years due to the rising production costs in China. However, the instability of the market price and the growing local demand are two areas that should be constantly monitored in order to capture an accurate picture of the changes in the Chinese vegetable market.

Promar Consulting has investigated a variety of aspects of the vegetable market in Japan, China and other Asian countries. If you are interested in knowing more please contact us.