That China is a massive market for US (and global) food products is not news, but the recent boom in cranberries illustrates some interesting emerging trends in China as a consumer market – the quick uptake by Chinese consumers of a completely new fruit and the very fast and diverse development of Chinese-made retail products featuring cranberries. Unlike other berries, cranberries must be cooked or somehow processed to be palatable, meaning they are not the easiest fruit to be accepted into a market with no history of cranberry use. Nevertheless, the Chinese interest in cranberry flavor, the rapid consumer education on cranberry health benefits and the fast and creative turnaround of Chinese food processors to create new products have resulted in a hit import. 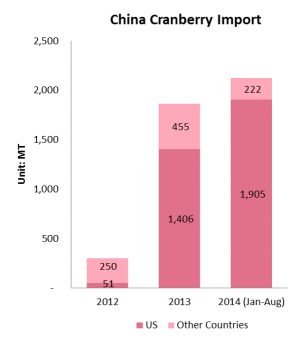 China’s cranberry boom began in 2012, and has grown dramatically over the past three years. Chinese import data on prepared and preserved cranberries (mostly branded dried cranberries), shows that from January to August this year (just 8 months!), the total number of dried cranberry imports (approximately 2,000 MT) was already about 7 times the volume of 2012 (approximately 300 MT).  China’s largest cranberry supplier is overwhelmingly the US, which had a share of approximately 90% of the total imports in the first month of 2014, followed by other suppliers including Chile, Canada, and Norway.

What is driving this boom appears to be interest in the health benefits, especially among young women, as well as a positive acceptance of the cranberry flavor. To capitalize on this, US Cranberry Marketing Committee has been promoting US cranberries in China through one of China’s most popular social networks – Weibo – emphasizing the health benefits of this anti-oxidant rich fruit and its crisp taste.

Cranberry products are now seen as especially popular among young office ladies, who eat them for snack. In the past three years, increasing numbers of cranberry pastries and drinks can be found in bakeries and street drink vendors – using real dried cranberries. This fast acceptance of food companies to use this new, foreign ingredient in creative products indicates that catering to the interest in healthy foods among young professionals is lucrative.

Attempts are even being made to use cranberries in Chinese cuisine, especially in meat dishes where some chefs hope to dilute any oily taste and make the dish more refreshing. This is still very new to most Chinese consumers, but social media reports good feedback from people who have tried it.

Despite the cranberry growth, a recent consumer survey of 10,000 people showed that only half of Chinese consumers even know about cranberries. Hence, we believe, with China’s growing health consciousness and more consumer education, cranberry demand will grow even more in China.

Cranberries today can be easily purchased from the local mid- to high-end supermarkets in major cities like Beijing and Shanghai, and can also be easily be purchased online – which is preferred by younger shoppers, who have a busy work life and enjoy the convenience of online shopping. Costco’s China official shopping website debuted on Oct 12th 2014, and in the first 3 days alone, dried cranberry orders were approximately 15 tons. The sales rate has not slowed down, and cranberries are one of the Top 3 Sellers on the Costco online web store.

Promar’s China office closely follows Chinese consumer trends in food products. We have worked on market analysis of various fruit markets throughout Asia and are also the representative in Japan for North American Wild Blueberries. For more information, please contact us.