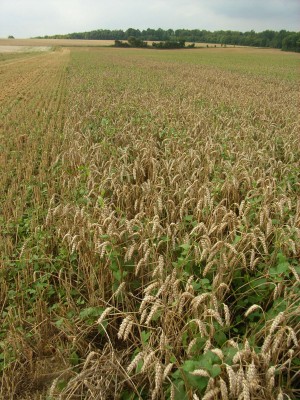 Promar consultant Ayako Kuroki recently completed a field study on the effects of the recent drought on wheat and corn production in France. While France is known for its cheese and wine, it is also the largest grain producing country in the EU, annually producing 35 million tons of wheat, 10-15 million tons of corn, and approximately 10 million tons of barley. This spring, however, France was hit with the country’s worst drought since 1976 and there were concerns that the drought would impact grain production (especially wheat) and the dairy industry. Fortunately, rain in June and July has helped crops to recover.
The harvesting season for wheat in France is from July to August. Because this spring’s drought was followed by rainfall that exceeded the precipitation average of past years, harvesting has had to be temporarily postponed. While there are also concerns that the excessive amount of rain could cause the spread of fungus that is damaging to crops, the overall crop quality is forecasted to be very good this year. French wheat production though, is estimated to drop 6-10% compared to the previous year. Considering that the wheat harvesting area in France has increased since last year, it becomes clear that the influence of the drought on wheat has not been negligible. In contrast, corn benefited from the heavy rainfall and is forecasted to have a rich harvest in autumn.

Agricultural unions traditionally play a significant role in France. They control 70% of grain distribution and sales, and yet are also very aggressive in promoting agricultural exports. An example of this dual interest could be seen when Promar visited Pau, a city in southwestern France that is known as a major corn producing region. Euralis, the agricultural union for the region, not only produces more than 800,000 tons of corn annually, they are also known for their foie gras which is sold in China and other emerging markets.

Picture: Weeds growing in a wheat field due to the delay of the harvest, southern France, Aug 2011