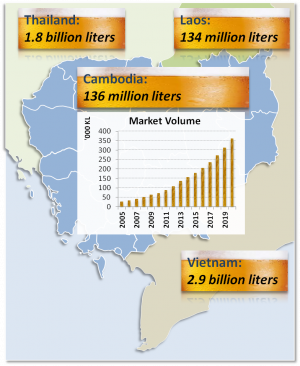 Beer gardens in Cambodia are filled with the sounds of beer glasses almost constantly clinking, vibrant chatter among friends, and the banter of beer promotion girls making sales rounds. Cambodia’s beer market may be small, but it is a vibrant one, and like other emerging beer markets such as Myanmar and Laos, Cambodia is poised to show strong growth over the coming years.

72% of Cambodia’s 136 million liters beers is brewed domestically. The market is dominated by Cambrew, a subsidiary of Carlsberg A/S, who is the no.1 brewer in the Cambodian beer market with its flagship brand Angkor beer, named after the world renowned Angkor Wat temple. Cambodia Beer Limited (CBL), established in 1996 and backed by Dutch beer giant Heineken, is the main competition and it brews Anchor beer as well as ABC and Tiger beer plus the economy price-point beer Golden Crown in its factory just southwest of Phnom Penh, off National Highway 1. Together, Cambrew and CBL hold an estimated 82% of the beer brewed domestically, and battle each other through consumer-targeted marketing and trade promotion for market share at on and off-premise outlets. Newer market entrant Khmer Brewery Limited (Cambodia beer) is giving the two giants some serious competition, and smaller breweries like Kingdom Breweries and Ganzberg are also trying to move into the market. 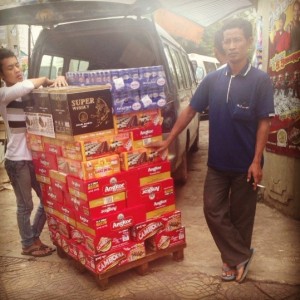 Cambodia also has plenty of imported beer – 28% of the beer market comes from oversees – mostly Thailand and Vietnam. Legal beer imports in 2013 amounted to 7.7 million liters, but it is estimated that 5 times more came across the borders unofficially. Import beer brands in Cambodia are diverse, both in flavor, and price-point. Among premium beers, Heineken and Budweiser, both imported by local distributors under exclusive handling contracts are quite prevalent at modern and traditional retail outlets through the country. Heineken and Budweiser bottles (330ml) are usually sold retail for USD 1.40. Both of these brands are also currently making a big push to target Khmer premium on-premise outlets. Standard and economy brands from Vietnam, Thailand and Laos are increasingly found in the market. For example, Leo beer, brewed by Singha in Thailand, is currently popular with younger drinkers in Phnom Penh. The brand’s popularity can be linked to its affordability (USD 0.55/330ml can) as well as the strong marketing presence behind the brand. Even renowned Belgian beers like Maredsous Brune and Duvel can be found at some high-end off-premise locations in the capital, albeit retailing at close to 6 times the price of a Heineken. Cambodia’s imported beer market is likely to grow in-step with overall market growth, and benefit from tariff reductions scheduled for 2015 as agreed to by ASEAN countries.

The market drivers behind the growth of the Cambodian beer market are social, economic and industry driven. Socially, beer drinking in Cambodia is no longer entirely male dominated. Now, beer consumers increasingly include both men and women. In addition to a shifting gender balance, the typical drinker age profile is also changing, and more young people are enjoying beer. It is hard to pinpoint an exact reason as to why more women and young people are drinking. One theory is that, mixed-group drinking is growing in popularity partly as a result of the heightened prevalence of on-premise outlets in Cambodia, such as daytime clubs popular with high school students and beer restaurants popular with men and women alike. As for economic drivers, growing household incomes are certainly expected to support people’s power to purchase beer. Lastly, the market’s competitive nature itself is serving as a driver. Beer companies in Cambodia are upping their brew capacity and output, spending more on marketing, and growing their distribution muscle in retail, restaurants and beer gardens.

Cambodia’s beer market is small, but it is vibrant, and is showing great potential for growth. Looking forward, we can expect heated competition for increased market share from local brewers, as well as an increase in beer imports, especially from Thailand, which will certainly boost the volume of beer available in the market. More beer and steadily increasing spending on consumption will also support the market favorably. Lastly, with younger people enjoying beer, the number of potential beer drinkers in Cambodia is increasing as beer drinking shifts from a pastime of the middle aged to an inclusive form of social recreation.

Promar Consulting has done numerous projects investigating various agriculture, food and beverage markets in Southeast Asia. If you are interested in learning more, please contact us.