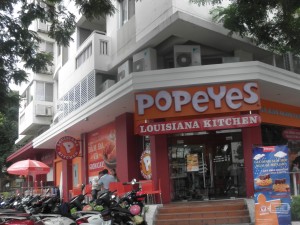 Until 2010, KFC was the main Western player, with only few others starting to test the market. However, since 2010 Vietnam has seen a fast food boom, with major chains like Pizza Hut, Domino’s, Popeye’s, Burger King, Carl’s Jr, Subway and Coffee Bean and Tea Leaf entering the Vietnamese fast food market. At the same time strong local competitors such as Highlands Coffee and Trung Nguyen Coffee are building a modern coffee culture, usually starting in Ho Chi Minh City, and then moving to Hanoi and other major cities.

The competition from cheaper traditional street food has been major factor in the marketing positioning that almost all Western chains have taken, with most of them choosing to go premium. Prices target higher end consumers: Pizza Hut offers extensive menus, silverware and waitstaff (a strategy that is working well in China) making it a popular date destination. Other fast food chains in Vietnam cater to kids and young middle class Vietnamese families will make a fast food visit the focus of the afternoon. Wi-Fi is free and coffee at the Western cafes is as much as 5 times the price of a street vendor. And yet the shops do brisk business. This is about a lifestyle – being seen at these shops is as important as actually eating the food. 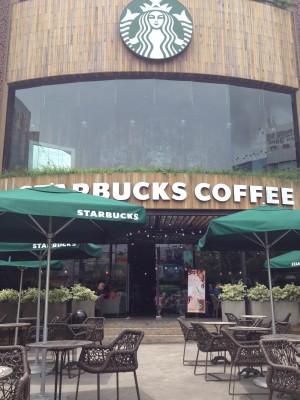 However in addition to competition from “traditional fast food”, two other factors that limit fast food growth are real estate and infrastructure. The cafes and fast food chains which pitch themselves as premium must locate their shops in premium areas, such as District 1 in Ho Chi Minh City (HCMC) or higher-end office parks in District 7. Ideally they want real estate on the corner of a busy and trendy area. These spots are going fast and many chains are finding it difficult to find affordable real estate that offers the right kind of exposure.

The second problem is infrastructure, particularly cold chain and transportation. Chains like Burger King who uses cheese, Popeye’s which uses fresh chicken and KFC with its frozen chicken need warehouses, central kitchens and ingredient sources that are reliable and nearby. So far this has limited most fast food chains to HCMC and Hanoi where they build their own central kitchens and warehouses.

In looking at the list of fast food and café giants now tumbling into Vietnam one after the other, two major names seem to be missing: Starbucks and McDonalds. The wait is now over. Starbucks opened its flagship store in HCMC in February, a huge shop that gives you a Wi-Fi password with your order. It has a trendy high-ceiling industrial design that could be anywhere in Soho. A second shop just opened last week.

McDonald’s has announced that it will be opening a store in the next few months and it is expected to expand rapidly. Vietnamese consumers are very curious about the brand and there is real excitement. Many in the Vietnam food industry think that McDonald’s entry will have a major impact on the Vietnam restaurant industry, from sourcing and operations style to marketing and promotion capability.

In fact, Promar’s on-the-ground research into the Vietnamese fast food market, conducted earlier this month, indicated that the entry of Starbucks and McDonald’s is already having an impact. Trendy local café chain Highlands Coffee has removed many of the western food items, like sandwiches, from its menu, which they say was done in order to differentiate from Starbucks and maintain an identity of “modern Vietnamese”. Burger King, which has only recently started to expand from its flagship store in the international airport, also admitted that McDonald’s entry into Vietnam will be a test for all burger chains to really strengthen and differentiate their brands in order to survive.

Promar has done numerous projects in Vietnam and Southeast Asia in the growing fast food, cafe and bakery markets. If you are interested in learning more, please contact us.