The climate effects of La Niña includes severe droughts in Brazil, Argentina, and other parts of South America. When this phenomenon last occurred in 2010/11, it was relatively moderate and did not significantly affect soybean and corn yields. However, when La Niña appeared back in 2008/09, was said to be the worst in 100 years.
In 2011/12, harsh droughts struck again. This time it is said to be worse than that of 2008/09. This study uses the most recent data, and first hand information, to explore how much damage is done to productivity and production of both soybeans and corns in Brazil and Argentina. 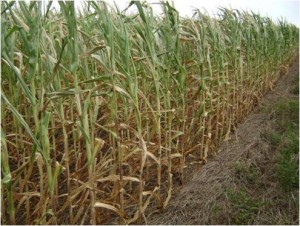 Most soybeans are planted during October/November, with the exception of regions with a milder winter where two crops are planted each year, such as in north Parana.

This time round, La Nina’s harmful effects on rainfall hit crops as early as November 2011, with the situation exacerbated in December. DERAL-PR reported in late December that 44% of soybean planting and 62% of corn  planting in one of Brazil’s major production area, Parana state,  were in flowering/fruiting state, thus were in dire need of rain. Previous La Nina phenomenon lead to varied affects on grain reduction. Between December 19th 2011 and January 4th 2012, DERAL-PR reported that soybeans in medium/bad condition leaped from 18% to 32%; crops in good condition dropped from 82% to 68%. As to corn production: medium/bad condition crops increased from 26% to 37%; crops in good condition was significantly reduced to 63%,  from 74%  in December.

With the dry period starting just after November  21st 2011, and with the reduction in rainfall in December by two thirds compared to normal, Coopavel (located in West Parana) reported an estimate of 30% drop in crop production. In Santa Catarina, estimation of crop reduction are 30-50% and 10% in corn and soybean production, respectively. In many areas of west and northwest Rio Grande do Sul, 101mm of rain fall, compared to 163 in normal years, lead to productivity being merely 2000kg/ha in the north Parana, 500kg/ha lower than the level needed to make a profit.

By the end of January, the combination of lack of rain and high temperature cut Parana’s corn productivity mean initial value of 7900 kg/ha before the drought to 5500 kg/ha at harvest. At the end of December, EMATER-RS of Rio Grande do Sul estimated up to 40% loss in corn production, whereas FARSUL’s estimation was 34% and 49% reduction in soybean and corn yields, respectively, at the start of February.

Other adverse effects of drought include: farmers in debt, accentuated problem of a short supply of winter corn seeds,  increased cost of pork production due to having to import corns, a reduction in milk production, and continued negatives effects on 2012 winter corn development and productivity. 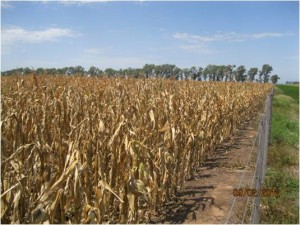 Promar consultant visited corn and soybean production sites by car, in February. Provinces of Buenos Aires, Santa Fe and Cordoba together constitute to around 70% and 75% of Argentina’s total corn and soybean areas, respectively.

The difference between the plantation of corn and soybeans in Argentina compared to Brazil is that on top of corn plantation in September, and soybeans the following month, a 2nd crop making up to about 30% of the total area planted for soybeans is planted on recently harvested areas of wheat after December 15th. 2nd crop usually has a lower productivity than the main crop. Compared to Brazil’s 2nd crop (corn or cotton) which makes up a significant proportion of the total crop, Argentina’s 2nd crop is planted earlier, and makes up to a maximum of 30% of the total crop.

In December and January, the three major production provinces all suffered from rise in percentage of bad crops, to different degrees. This was due to high temperature which lowered humidity, which in turn increased the demand for water and thus rainfall. The welcoming rain on January 10th in Zona Nucleu was nevertheless not sufficient to offset the low soil water levels.

On a brighter note, early maturing corn varieties planted in August in Santa Fe missed the drought and  yielded 6.5-8.5 T/ha. However, it is estimated that at least 900 KHa of corn originally planted for grains in September will only be fit for animal forage. 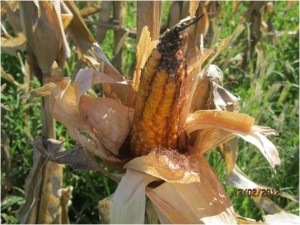 More rain arrived on January 23-24th , falling on 20% of Zona Nucleo, parts of southern Santa Fe and south Cordoba. Though it did not solve the replenished soil water reserve issue.  The weather improved further in February, with an increased rainfall in north Bueno Aires, northwest Entre Rios, and north Cordoba. This is too late to salvage the corns, but will have a positive effect on soybeans. The drought delayed plantation of 2nd corn crop until early January.

The latest forecast of grain production for soybean is 45 mmT or less; for corn is 20 mmT. However, it is difficult to quantify estimations of corn production loss, as it depends on many factors. What we can be certain is that corn production is hit much harder than soybean production.

The latest rain and soil maps show that the situation is on the path to improvement. Nevertheless, localized rainfall makes it tricky to quantify production, resulting in a perhaps overly-exaggerated forecasted loss in soybean production. On the other hand, the estimated loss for corn production is almost certainly close to reality.

Other adverse effects of drought includes: increase pests on soybeans which necessitates up to 4 insecticidal sprays; farmers in a weaker position as government refuses to see the full impact of the drought, on top of insurance companies’ reluctance to insure crops from droughts; decrease in export leads to a decrease in government income from export taxes (‘‘retenciones’’); and increased sales of animals which in turn decreased their prices.