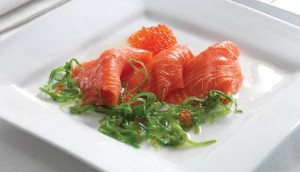 While sashimi (raw sliced seafood) has long been popular in Japan, salmon has only recently become part of the Japanese sashimi menu. It is only in the last 20 years, when farm-raised Atlantic salmon from Norway and then salmon trout from Chile began to appear in Japanese markets, that salmon sashimi began to be eaten in Japan. While Japan has long been a salmon eating country, its native salmon are wild and generally not safe for raw sashimi consumption due to parasites.

Salmon has been steadily pushing into the Japanese sashimi market and slowly taking share in this otherwise very traditional and very static market. The Japanese retail sashimi market is a market dominated by tuna (30% share) and a handful of familiar white fish (sea bream, yellowtail, squid and others).

Within this traditional market, salmon has proven to be a completely different and modern product. While the other sashimi fish are almost always served with soy sauce and wasabi, salmon has successfully been sold with “unconventional” ingredients such as chopped onion, salad dressing, mayonnaise, etc. It can be seen in the retail sashimi corner as carpaccio or slightly seared.

Due to the dynamic and unconventional uses of salmon in Japan, as well as a general appreciation of salmon among children and young people, who first encountered salmon at Japan’s ubiquitous “conveyor belt sushi” restaurants, the composition of the Japanese retail sashimi section has been changing. Sashimi sales in supermarkets and hypermarkets overall have been flat over the past decade – salmon alone has been steadily growing and is solely responsible for the growth of the Japanese sashimi market in the past few years.

In fact, last year was Norwegian and Chilean salmon’s biggest year in terms of imports and sales in Japan. The main reasons for this boom are the steady demand for salmon in Japan as well as a decrease in the import price, which coincided with a price increase for tuna, which is considered to be sashimi salmon’s biggest rival.

This salmon sashimi boom can be considered a bright spot in Japan’s fish market which overall has been declining in volume year by year, as more Japanese consumers turn away from fish in favor of meats and other protein. Salmon sashimi may still receive mixed reviews from older Japanese who did not grow up eating salmon raw, the great enthusiasm for raw salmon among children and younger women in particular suggests that salmon will continue to have opportunities in the Japanese sashimi market. It may have a ways to go before it can catch up to tuna in the sashimi market, but the acceptance of salmon as “unconventional” ingredient ultimately gives it much more flexibility in the Japanese sashimi market than tuna has ever had.

Promar Consulting has investigated a variety of aspects of seafood markets and fisheries issues in Japan and other regions. If you are interested in knowing more please contact us.